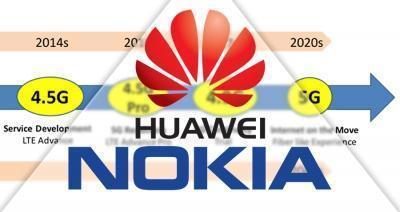 The potential of 5G, which is expected to launch commercially in 2020, has telecom operators eager to adapt in order to implement the technology early on. But progressing from 4G to 5G isn’t necessarily straight forward. 4.5G and 4.9G – the generation’s between 4G and 5G – are now common terms in the wireless industry, designed to establish a smooth path to 5G for operators, explains Kai Sahala, head of Radio Access Marketing at Nokia.

4G won’t just fade away when 5G arrives. In fact, 4G is expected to complement 5G. 4.5G provides better performance than 4G systems, as an interim step towards deployment of full 5G capability.

The technology involves LTE-Advanced (a major enhancement of the LTE standard) including 4X4 MIMO (a method for multiplying the capacity of a radio link using multiple transmit and receive antennas to exploit multipath propagation). 2X2 MIMO is already in basic LTE from day one and 4X4 MIMO is part of the LTE-Advanced specification.

4.5G features include much faster download speeds (4 to 5 times that of 4G – 600Mbps compared to 100-150Mbps), far greater spectrum efficiency and use of heterogeneous network (can boost network capacity by 3 to 5 times in comparison to 4G), and carrier aggregation (up to five carriers can be used on 4.5G).

4.5G is based on LTE-Advanced (3GPP Rel. 10-12; prominent features include 2560AM, 4X4 MIMO, Carrier Aggregation) and LTE-Advanced Pro (3GPP Rel. 13; prominent features include NB-IoT, LTE-M). It was designed to “further improve network data rate, improve user experience and expand vertical applications.” Huawei introduced the concept of 4.5G in 2014, saying it represents “the right way along the LTE evolution path towards 5G.”

One of the 4.5G milestones Huawei oversaw was the first 4.5G trial in Africa in April 2016 in Namibia. Huawei collaborated with MTC, the largest operator in Namibia. A speed test showed the peak download speed of the LTE-A network reached 300Mbps, and the 4.5G network reached 1Gbps. Other 4.5G milestones for Huawei include the implementation of the fastest mobile site in New Zealand.

Last September, Nokia introduced 4.5G Pro, an advanced mobile technology to deliver the significant capacity and speed enhancements by operators as they build towards next-generation networks (5G), including meeting the demands of ultra-connected megacities (smart cities).

Powered by the Nokia AirScale radio portfolio, 4.5G Pro is designed to enable major increases in LTE capacity, coverage and speed where and when they are needed. Nokia also outlined its plans for 4.9G, a technology which will allow users to maintain a continuous 5G service experience using an evolved LTE to complement 5G coverage. Nokia has defined 4.5G Pro as “the next step in a technology that will optimize the journey to 5G.”

“While we are developing 5G heavily, we have also identified a need to evolve 4G networks further than they are today to be able to have more capacity and satisfy subscribers’ 4G connections,” Kai said. “5G will only come gradually, and data traffic is growing up to 50 percent per year on networks, so we need to take care of 4G.”

Nokia’s 4.5G Pro is available commercially today. It is the “next step towards 5G,” says Kai. “We are talking about 1 gigabit speed.

Kai continued: “It is beneficial for operators to go to Nokia AirScale Cloud RAN because in 5G you need cloud to be able to process the massive amount of data, so for network architecture, it makes sense to begin this process so there aren’t any surprises when 5G arrives.”

In March this year, Nokia and Ooredoo Qatar deployed 4.5G Pro technology to increase mobile data speeds to up to 800 Mbps for Ooredoo's customers in some of the busiest areas of Qatar's capital city Doha. With the deployment, Ooredoo Qatar became the first operator in the Ooredoo Group, and one of the first operators in the world, to launch 4.5G Pro services.

The technology is powered by the Nokia AirScale radio platform and the deployment leverages two component carrier aggregation with 4x4 MIMO antenna technology and 256 QAM to deliver the peak 800 Mbps speeds.

In a demonstration of 4.9G technology at Mobile World Congress this year, Nokia showed Ooredoo how data speeds could be increased to 3Gbps in the future. Nokia says it will introduce its 4.9G technologies by the end of 2017, allowing operators to dramatically enhance their network performance and manage the significantly higher infrastructure demands on the path to 5G.

4.9G is about bringing 4G to a level which can allow 5G users who fall out of the 5G coverage to enjoy the services with the wide LTE footprint that’s available, Kai explained. Operators can select different features of 4.9G that they want to employ on their network. Nokia 4.9G will ultimately provide significant increases in capacity and several Gigabits of speed-per-second on the path to 5G.

“4.9G also supports lower latency of less than 10 milliseconds to support 5G-like applications, and also utilizing new architecture cloud,” said Kai. “Many operators already have their core networks on cloud and now we are also moving Radio Access to cloud. This enables bringing content closer to users, as well as more capacity and abilities to control traffic.”

Nokia has also launched the first end-to-end 5G solution called 5G FIRST for the early adopters of 5G, which will be available during the second half of this year, according to Kai. “It’s not just radio access – it has everything such as services for accelerating 5G deployments, as well as devices from our partner Intel to make 5G deployment real,” he said.

5G will meet three key pillars according to Kai: huge speeds (up to 10Gbps), extremely low latency (1 millisecond), and a massive number of devices. We can imagine, he explained, that if the Internet of Things is starting to pick up during the 4G era, then during the 5G era the number of devices will grow immensely. 5G could support a million devices per square kilometer, Kai said.

“We are trying to demonstrate why these key pillars matter. For example, high speeds enable things like virtual reality 4K videos. There is huge demand for faster speeds and more capacity. Low latency can be illustrated very well with virtual reality because the response time for VR needs to be instant for it to be enjoyable.”

The important thing to remember, Kai said, is that you can deploy 4.5G Pro, 4.9G and 5G simultaneously. While you’re developing your 4G networks you can start working on 5G and “they will come together nicely.”

5G FIRST, which Nokia has brought to the market, is based on early specifications of 5G and one of the specifications is 5GTF (5G Technical Forum) which is being driven mainly by Verizon and other industry leaders, said Kai. The Verizon 5G Technology Forum (V5GTF) was formed in late 2015 in cooperation with ecosystem partners Cisco, Ericsson, Intel, LG, Nokia, Qualcomm and Samsung.

The V5GTF forum partners collaborated to create the 5G technical specifications. The 5G radio interface is composed of Layers 1, 2 and 3 and defines the interfaces between the User Equipment (UE) and the network. These specifications promote interoperability among network and UE/chipset manufacturers.

Nokia successfully carried out the world's first connection based on the 5GTF 'pre-standard' in February this year, marking a further milestone in Nokia's momentum to make 5G a commercial reality. The test adds another key component to the development of 5G and the implementation of the first 5G applications, demonstrating the ability to provide fast pace implementation according to early standards including device interoperability.

The fact that the 3GPP 5G standards are not yet complete is not a barrier, says Kai. “We need to make the standards proper from day one so we can start implementing them,” he said. “We understand that the standards take time and effort from within the industry to make them perfect. The benefit for us is that we can now start 5GTF which is already established, so we can gain early experience.”

“The reason our industry has been so successful is because it has been standardized,” Kai continued. “Standardization takes consultations, time, and alignments. At the moment we are at the stage where the requirements for 5G are fully understood and agreed: we need massive capacity, low latency, and we need to be able to connect billions of objects. Those are the key elements of 5G.”