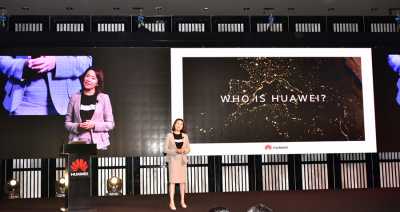 Huawei has outlined its ambition to become a “global iconic tech brand”. Ms. Glory Cheung, Huawei Consumer Business Group’s Chief Marketing Officer, made the statement at the Chinese company’s ‘Future of Innovation’ event held in Dubai on Sept. 20. Ms. Cheung was joined by two other Huawei Business Consumer Group executives, who emphasized the company’s ambition to become the number one smartphone brand.

Ms. Cheung spoke highly of Dubai and the wider Middle East region, praising the growth of innovation in Saudi Arabia and the UAE. She said Huawei is pleased to support the region’s agenda of fostering innovation. Ms. Cheung added, “We look forward to being a part of the region’s innovation agenda and continue to be its champion by bringing cutting-edge technologies to the Middle East’s rapidly evolving digital arena.”

Huawei has grown significantly as a smartphone brand the past few years. Huawei surpassed Apple in global smartphone sales consistently for June and July this year, according to research from Counterpoint’s Market Pulse for July 2017. Huawei’s global growth, according to Counterpoint Research Director, Peter Richardson, can be attributed to its consistent investment in R&D and manufacturing, coupled with aggressive marketing and sales channel expansion.

“Globally, Huawei is a top investor in R&D (research and development) and we focus on bringing together the world's best intellectual resources to strengthen our innovation capability,” said Ms. Cheung discussing Huawei’s growth. “This is to ensure we are constantly delivering intelligent innovations to enhance and exceed mobile experiences of our customers.”

However, a weak presence in the South Asian, Indian and North American markets has limited Huawei’s potential growth in the near-to mid-term to take a sustainable second place position behind Samsung, Mr. Richardson claims. The company is “over-dependent on its home market China where it enjoys the leadership position and operator-centric markets in Europe, Latin American and Middle East,” he said.

Nevertheless, Ms. Cheung emphasized Huawei’s commitment to fueling innovation and collaborating with leading partners around the world to transform customers’ experience, as well as Huawei’s growing market share year-on-year. With the release of Apple’s new iPhone 8, iPhone 8 Plus and the iPhone X, Huawei could slip back into third place, which the company is clearly aware of, hence its focus on driving brand recognition.

Mr. Clement Wong, Head of Global Product Marketing, Huawei CBG, highlighted the company’s vision of the next frontier in mobile and introduced Huawei’s newest 970 Kirin – an artificial intelligence (AI) powered chipset. By combining the power of the cloud with the speed and responsiveness of native AI processing, Huawei confirmed that it will unveil the Huawei Mate 10 series with Kirin 970 at an event in Munich on October 16.

“Huawei is committed to developing smart devices into intelligent devices by building end-to-end capabilities that support coordinated development of chips, devices, and the cloud,” said Mr. Wong. “The ultimate goal is to provide a significantly better user experience. The Kirin 970 is the first in a series of new advances that will bring powerful AI features to our devices and take them beyond the competition.”

While Huawei climbed to be the world’s second largest brand overall this month, Counterpoint Research analysts pointed out that none of its models broke into the top ten rankings. Senior Analyst, Pavel Naiya said Huawei’s diverse portfolio allows the company to fight on multiple fronts, but it “does little to build overall brand recognition; something Huawei badly needs if it continues to gain share.”

Huawei will be banking on the release of its forthcoming AI-powered smartphone to boost its brand recognition in the premium smartphone segment.

The event also provided an understanding of Huawei’s vision and plans for the Middle East. Mr. Gene Jiao, President of Huawei CBG, Middle East and Africa, said the Middle East is “one of the most crucial markets for Huawei and over the last couple of years, we have grown from strength to strength, focusing on improving the quality of our products, services and market performance.”

According to the 2017 H1 GFK report, Huawei is now ranked number two in the Middle East and Africa region in terms of sales volume with 13.8 percent market share, after Samsung. Mr. Jiao said Huawei will continue to invest in partnerships with key government entities across the region to support innovative growth.