Trump says Apple will build three manufacturing plants in US 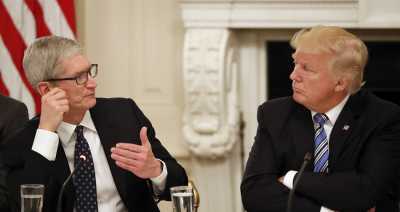 About 80,000 people work for Apple in the US and is said to employ about two million people in total. The company was criticized last year by Trump during his presidential campaign for outsourcing its manufacturing to factories in China. In an interview with TIME, Trump said he hoped Apple would shift its manufacturing to the US.

Only a small amount of Apple products are produced in the US, according to the WSJ, and are made in the country on contract. Flex has a deal with Apple to make Mac computers in Austin, Texas, while Quanta Computer produces Macs in Fremont, California.

However, majority of Apple products are being made in China, mainly by Foxconn Technology, a company that produces iPhone products and others. Trump also claims Foxconn has plans to build a large plant in the US and is considering locating it in Wisconsin.