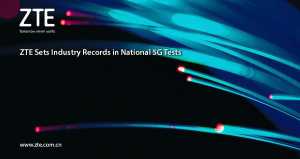 In the eMBB@Sub6GHz test scenario, ZTE provided 28 streams for multiple users by using the 3.5 GHz pre-commercial base station, with a peak cell throughput higher than 19 Gbps, a new industry record. This data rate is higher than the ITU-defined value (10 Gbps). ZTE’s solution overcomes the limitations of standard interfaces, and provides more spatial division streams than the standard and common value (16 streams) in the industry. This technology is especially suitable for China's densely-populated urban areas, highlighting ZTE’s technology leadership in 5G eMBB scenarios.

ZTE was the first to use the 26GHz base station in the high-frequency eMBB test scenario, and achieved a 4-stream rate of 13 Gbps even when a single test terminal supported a bandwidth of less than 1 GHz. This rate is higher than that defined by ITU (10 Gbps), and is a major step forward in the development and commercialization of high-frequency mobile communications.

In the mMTC test scenario, ZTE increased the overload rate of connected terminals by 600 percent by using the innovative MUSA (multi-user shared access) technology, and verified an equivalent massive IoT access performance of 90 million connections/MHz/hour/km2, which is 90 times the value (1 million connections/square kilometers) currently defined by ITU. mMTC is one of the three key scenarios defined in 3GPP standards. ZTE plays a leading role in the NOMA (non-orthogonal multiple access) Working Group, serving to accelerate industry standardization of 5G globally.

In the uRLLC test scenario, ZTE achieved an ultra-low latency of 0.416 ms based on a unified test platform, lower than the ITU-defined 1 ms. The system is based on ZTE's self-developed chipsets, which is self-adaptable in eMBB and uRLLC scenarios. The results show ZTE’s leadership in the implementation of key 5G uRLLC technologies and prototypes, which is a key step for 5G commercialization in the future.

In the hybrid test scenarios, ZTE created a unified network supporting the air interfaces in eMBB, mMTC, and uRLLC scenarios through network slicing and base stations at sub-6GHz. This achieved flexible configuration of services, allowing a cell to connect a variety of service terminals. Test results showed that the single-cell peak rate reached 15 Gbps, while the air interface latency was lower than 0.416 ms, and the massive connectivity capacity was more than 90 million connections/MHz/hour/km2 at the same time. These three scenarios represent industry breakthroughs in the development for network air interfaces. Through the application of network slicing technology, ZTE simplified the complex network deployment and management, by providing unified air interfaces, bringing flexible and extensive user experience on the future 5G networks.

During the second phase of China’s National 5G tests, ZTE completed verification of its pre-commercial 5G products at sub-6GHz, millimeter wave as well as VCNs, and launched the laboratory and field tests smoothly when interconnecting with the instruments and chips from other manufacturers in the industry. The test results showed that ZTE's products can meet the key performance requirements in seven typical application scenarios, including higher spectral efficiency, greater connection density, higher reliability, and lower latency of air interfaces. ZTE is committed to driving the commercialization of 5G products, laying a solid foundation for commercial 5G deployment in China by 2020.