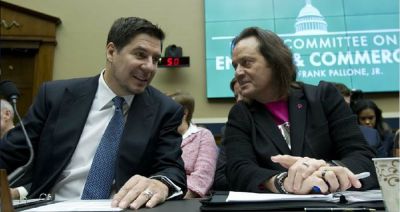 T-Mobile and Sprint have said they were taking the final steps to complete a tie-up that reshapes the US wireless industry after a federal court overturned an antitrust challenge.

The decision by US District Judge Victor Marrero rejecting a challenge from New York, California and other states is expected to allow the third- and fourth-largest mobile carriers to complete their merger around April 1, the companies said.

The two firms said in a statement they were "now taking final steps to complete their merger to create the New T-Mobile."

The combined firm with have more than 100 million customers, claiming the scale to compete with larger wireless rivals Verizon and AT&T.

"Today was a huge victory for this merger," said T-Mobile chief executive John Legere, who will head the combined firm before stepping down in May.

The states had filed the suit last June, seeking to block a proposed $26 billion tie-up they argued would cause "irreparable harm" leading to higher costs that would price out low-income consumers.

The judge said however he was "not persuaded" by the contention that the new company would pursue anticompetitive behavior after the deal.

T-Mobile, controlled by Germany's Deutsche Telekom, will hold a majority stake in the new firm after the tie-up with Sprint, which is controlled by Japan's SoftBank.

Backers of the deal have argued that combining T-Mobile and Sprint will create a strong number three US wireless carrier behind Verizon and AT&T, with the resources to invest in 5G, or fifth-generation, networks.

Critics contended it would leave consumers with fewer choices, and lead to higher prices.

"It is more clear than ever that we need strengthened regulatory oversight of the communications industry to protect competition and consumer rights, as well as improvements to our antitrust laws."

Avery Gardiner, a competition fellow with the Center for Democracy & Technology, said on Twitter that mergers that leave just three competitors "are almost always bad for consumers" and "almost always blocked because they 'substantially lessen competition.'"

The deal was approved by federal regulators, contingent on the divestment of Sprint's prepaid division Boost Mobile to the satellite broadcast group Dish, which will begin building a new national wireless network.

Shares of Sprint surged 73 percent on the news while T-Mobile jumped 11.3 percent.

T-Mobile has said the deal would give it the resources needed to invest more in 5G and in-home broadband compete with "Big Cable" firms.

Some analysts have suggested that the final deal may be revalued lower as a result of changing market conditions since it was announced in 2018.

Walter Piecyk and Joe Galone of Lightshed Partners said Sprint may be worth less than the original $26 billion.

"We have repeatedly expressed our view that T-Mobile should renegotiate the price of the deal with Sprint based on the longer than expected approval process and the worse than expected erosion in Sprint's business," the analysts said in a research note.