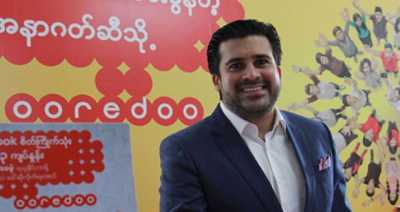 Ooredoo said in a statement that Meza will be returning to his home country of Paraguay after playing a significant role helping to build Ooredoo’s Myanmar operation the last two years. Ross Cormack held the chief position before Meza took over in August 2015, laying the ground work for Ooredoo to win a mobile license bid in Myanmar when the nation opened up to foreign investment.

On his LinkedIn page, Meza said that his departure “marks the culmination of an amazing journey in telecommunications” that he started when he was 18 years old. He became CEO of the second-largest mobile operator in Tanzania at just 28.

The company will now be led by Sinha, who first joined Ooredoo Group as CEO of Ooredoo Maldives in 2014, and later became COO of Ooredoo Myanmar in May this year. Sinha previously worked with India’s Bharti Airtel for nine years.

Meza’s departure from Ooredoo Myanmar comes after the company posted revenues down 13 percent for Q1 2017. In the company’s presentation to investors, it said the highlight of the first half of the year was Ooredoo Myanmar’s “success in driving forward its efficiency program and cost reduction initiatives.”

Earnings before interest, tax, depreciation and amortization (EBITDA) increased to US$12.09 million, up from losses of $824,000 in the first half of 2016, but revenues were down 13 percent.

Myanmar is considered a “Fast Grower” market in South-Eastern Asia, according to GSMA Intelligence, with three telecom operators and 37.5 million mobile connections.

Ooredoo Myanmar launched mobile services in 2014, and currently has around 9.6 million customers, giving it an 18 percent market share behind state-owned MPT and Telenor, GSMA Intelligence says. The operator was the first to introduce 4G in the country. Rival Telenor Myanmar launched 4G in early July in the capital city of Nay Pyi Taw.