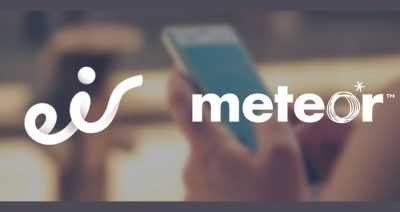 Irish telecommunications incumbent Eir has announced that it will ‘retire’ its mobile phone brand Meteor in September. Meteor has been a huge success since its inception in 2001, and has been particularly popular with the young generation of mobile phone users.

However, the mobile phone network will now be rebranded as ‘Eir’, which will see it join an existing mobile phone service provided by the company under the Eir name. Meteor has over 750,000 customers but the new merger will see Eir now have around 1.1 million mobile customers.

A spokesman for the Dublin-based telecommunications firm said that customers would benefit significantly from the rebranding, and assured customers that the transition from Meteor to Eir will be ‘seamless’. Eir, CEO, Richard Moat declared that the new merger decision would enable customers to explore a ‘world of possibilities’.

In a statement, the CEO said, "Meteor customers will continue using their mobiles exactly as before - with the added benefit of a world of possibilities. By focusing on a single mobile brand and reducing the duplication of supporting two brands, we can offer better value and increased innovation."

In addition to this, Meteor customers have received assurances that there will be no change to their current contract and data plans during the transition and rebranding process, whilst the current customer care lines will also remain intact.

Eir formerly known as Eircom acquired Meteor in 2005. It adopted an aggressive approach to marketing and advertising and a significant investment into both areas was subsequently made. Meteor sponsored a number of commercial events, including the Meteor Choice Awards.

The company is reported to be spending around €3m and €4m on its 'Let's make it possible' campaign and believes that the mobile phone business would be better served by benefiting from the lift provided by this campaign than separate marketing investment in Meteor.

It has also been claimed that Eir will begin to communicate the change to customers from this week onwards. The group has 84 retail units nationwide which is comprised of Eir, Meteor and dual branded stores that will all become part of the Eir franchise in the forthcoming months ahead.

Spokesman for Eir, Paul Bradley, said the decision to merge services clearly highlights and indicates the organization’s confidence in Eir. He said, "We have adopted a single brand strategy. You can get your bundle from Eir, your broadband from Eir, your TV from Eir and mobile from Eir. What it reflects is our growing confidence in the Eir brand. We are almost two years in from when the company launched the brand and there has been work to evolve the Meteor brand over the last couple of years because initially it was a youth brand and a pre-pay focused brand. But now it is a much healthier mix of prepay and bill pay."