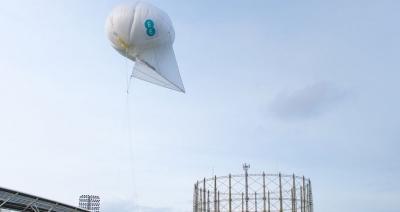 UK telecommunications company EE Limited, which is a division of the BT Group has unveiled new ‘balloon drone technology’ which has been specifically designed to provide 4G connectivity in disaster hit areas and underserved parts of the UK.

EE, the largest mobile network operator in the UK that boasts over 30 million customers, is also the largest operator of 4G services in Europe. At an EE technology showcase the company expressed its desire to bring connectivity to rural parts of Britain –highlighting not only how important it is to bridge the connectivity gap – but how much of a challenge it will be.

EE CEO, Marc Allera, unveiled a patent pending helium balloon named ‘Helikite’ which comes equipped with mobile mini-sites that can provide 4G coverage where permanent sites have either been damaged or there is no 4G coverage.

The EE CEO said that whilst rural areas of the UK are less attractive because there are naturally less customers which will subsequently result in lower returns – he explained how the organization was ‘obsessed’ in addressing coverage gaps in the UK.

EE’s CEO then spoke about the operator’s long-term plan in which it will provide ‘coverage on demand’ – disclosing details of EE’s plans to deploy a balloon solution within a rural environment this year which will use aerial solutions to provide additional coverage and capacity in three years.

He added, “Looking ahead, I see innovations like this revolutionizing the way people connect. In the future, why couldn’t we offer what we’re calling ‘coverage on demand’ - what if an event organizer could request temporary EE capacity in rural parts of the UK?”

In relation to EE’s work in the UK’s new Emergency Services Network – EE said it would deploy a fleet of Rapid Response Vehicles in forthcoming weeks and months ahead in order to support the infrastructure. Allera refuted suggestions that EE were behind on the project and stated the EE ‘was on track’ with its obligations.