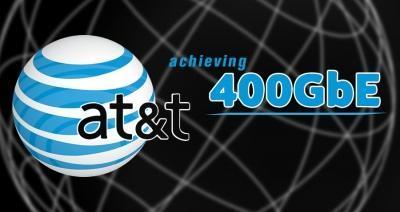 In the field trial, AT&T established a 400GbE connection between New York and Washington, D.C. This proved the AT&T nationwide software-centric network is ready for next-generation speeds.

400GbE end-to-end service was transported across the network, which was carrying live traffic. A software-defined network (SDN) controller created a service along the direct path between the two cities, and through software control rerouted the service to a second path to simulate a response to a network failure.

Late last year, AT&T announced its intention to be the first in the industry to demonstrate 400GbE service across our production network, aligning with its shift toward a software-centric network.

Traffic on the AT&T network continues to grow. 400GbE speeds will allow AT&T business customers to transport massive amounts of data faster than ever. That also means faster uploads and downloads and ultra-fast video streaming.

"Our approach to roll out the next generation of Ethernet speeds is working. We continue to see enormous data growth on our network, fueled by video. And this will help with that growth," said Rick Hubbard, senior vice president, AT&T Network Product Management.

Next-generation speeds like 400GbE can help transform the way AT&T’s customers do business.

The company is moving on to the second phase – a 400GbE end-to-end service transported across the AT&T OpenROADM metro network to the customer. This will show the network is ready for 400GbE to serve customers in metro areas.