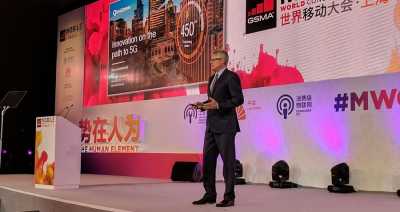 Qualcomm’s CEO claimed that out of the $12 trillion figure that he has touted as a potential revenue target from 5G related goods and services on a global scale - Mollenkopf believes that $2.4 trillion of that could be generated by the automotive industry alone. Focusing on the Asia Pacific region, Mollenkopf estimated that the economic impact of 5G will be profound in Asia. He has predicted that the 5G value chain in Japan, South Korea and China by 2035 will amount to around $1.6 trillion – which he suggested will also create around 12.5 million jobs across those three countries. Mollenkopf said: “5G will enable businesses we haven’t even thought of yet.”

However, with 5G standards not yet defined, Qualcomm’s CEO suggested that strategic rollout programs of gigabit LTE technology from telecommunication operators such as Australia’s Telstra will ultimately pave the way to 5G. He claimed gigabit LTE represented the ‘anchor of 5G’.

Mollenkopf said: “Gigabit LTE is here. It’s the anchor of 5G mobile experience. We’re on our second generation of gigabit LTE. Twenty operators worldwide are deploying it. It’s the first step towards the enhanced mobile broadband experience of 5G.”

Qualcomm also used MWC Shanghai to announce a number of new developments. With its partnership with handset vendor Vivo, Qualcomm will collaborate with Vivo to launch the ‘first ultrasonic fingerprint sensor’ which will embed underneath a handset’s OLED display which will enable enhanced mobile authentication, as well as providing you with the ability to monitor your own heartbeat and blood flow.