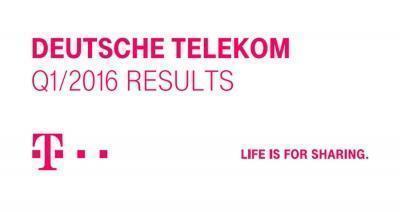 Deutsche Telekom posted a surge in first-quarter profits on the back of a divestment, while revenues also showed growth over the three months boosted by its US subsidiary.

The German giant said net profit reached 3.1 billion euros (3.6 billion) for the three months ending March, four times more than a year ago, boosted by the sale to British Telecom of its stake in joint venture EE.

As in previous years, the German group's growth was boosted by its business in the United States, where its subsidiary T-Mobile USA expects to sign up an additional 3.6 million subscribers this year alone.

At home, the former monopoly's fixed-line business is continuing to decline, while the growth of mobile usage is weak in a saturated market.

Deutsche Telekom's businesses in eastern and central Europe also showed declining profits, as any gains from a rising base of subscribers were wiped out by its massive investments in infrastructure for the region.

Nevertheless, the group confirmed its targets for the year, expecting a clear increase in revenues and an underlying profit of around 21.2 billion euros.