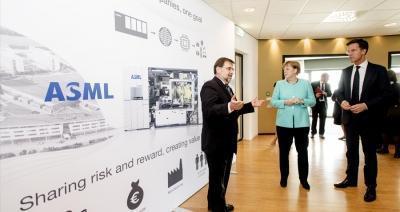 Dutch computer chip maker and global hi-tech leader ASML announced on Thursday, June 16, that it will buy Taiwanese chip inspection firm HMI in a multi-billion-euro deal, as it plans to speed up advanced microchip manufacturing.

"ASML and Hermes Microvision Inc. announce that they have entered into an agreement under which ASML will acquire all outstanding shares of HMI in a cash transaction valued at approximately 2.75 billion euros ($3.06 billion)," ASML said in a statement.

"The combination will allow ASML and HMI to further integrate and enhance their product offering at an accelerated pace," ASML said from its southern Dutch headquarters of Veldhoven, near the high-tech city of Eindhoven.

ASML is one of the world's leading makers of lithography systems used by the semiconductor industry to make integrated circuits and microchips. It makes systems for manufacturing processor chips as well as memory chips such as DRAM and SRAM memory, essential in production as the global appetite for mobile phones and touch-screen tablets continues to expand. HMI's equipment checks that the minute steps in making these machines have been properly carried out.

The deal is expected to be concluded by the fourth quarter and subject to approval by Taiwanese, U.S. and international regulators, according to ASML. The company employs more than 14,000 people and operates in 16 countries. It already employs 350 people at the Hsinchu City-based HMI, southwest of Taipei.