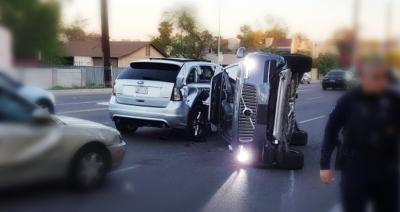 Uber has suspended its autonomous vehicle fleet in the US following an accident in the state of Arizona which left one of its Volvo SUVs flipped on its side when it was in self-driving mode. The ride-sharing company suspended the pilot project in Arizona immediately after the crash happened, including other regions where the pilot is happening: Pittsburgh and San Francisco.

“Our vehicles in Arizona remain grounded while we continue our investigation,” said an Uber spokesperson. “Our vehicles are grounded in Pittsburgh and SF today as well.”

According to the spokesperson, suspension of the self-driving car pilot will continue throughout the duration of the investigation into the crash. However, the suspension period does not have a specific time period, so it’s not clear how long all self-driving Uber vehicles will be grounded.

The company has been testing 12 cars in Phoenix, Arizona and Pittsburgh, Pennsylvania. After a dispute with regulators in California, Uber had to pull out its autonomous vehicles in the state, until earlier in March when Uber was granted a permit to test two autonomous cars.

Although the Arizona crash raises suspicion about the safety of autonomous vehicles, it has been reported that the self-driving Uber vehicle was not at fault. In fact, the other vehicle in the incident, according to the Wall Street Journal, “failed to yield.”