Apple Park, the company's new 175-acre headquarters campus that resembles a spaceship, will be ready for employees to begin occupying in April this year. The process of moving more than 12,000 people will take over six months, and construction of the buildings and parklands is scheduled to continue through the summer.

Envisioned by Steve Jobs as a center for creativity and collaboration, Apple Park is transforming miles of asphalt sprawl into a haven of green space in the heart of the Santa Clara Valley. The campus' ring-shaped, 2.8 million-square-foot main building is clad entirely in the world's largest panels of curved glass.

Jobs would have turned 62 this year. To honor his memory and his enduring influence on Apple and the world, the theater at Apple Park will be named the Steve Jobs Theater. Opening later this year, the entrance to the 1,000-seat auditorium is a 20-foot-tall glass cylinder, 165 feet in diameter, supporting a metallic carbon-fiber roof. The Steve Jobs Theater is situated atop a hill — one of the highest points within Apple Park — overlooking meadows and the main building.

"Steve's vision for Apple stretched far beyond his time with us. He intended Apple Park to be the home of innovation for generations to come," said Tim Cook, Apple CEO. "The workspaces and parklands are designed to inspire our team as well as benefit the environment. We've achieved one of the most energy-efficient buildings in the world and the campus will run entirely on renewable energy."

"Steve was exhilarated, and inspired, by the California landscape, by its light and its expansiveness. It was his favorite setting for thought. Apple Park captures his spirit uncannily well," said Laurene Powell Jobs. "He would have flourished, as the people of Apple surely will, on this luminously designed campus."

"Steve invested so much of his energy creating and supporting vital, creative environments. We have approached the design, engineering and making of our new campus with the same enthusiasm and design principles that characterize our products," said Jony Ive, Apple's chief design officer.

"Connecting extraordinarily advanced buildings with rolling parkland create a wonderfully open environment for people to create, collaborate and work together. We have been extremely fortunate to be able to work closely, over many years, with the remarkable architectural practice Foster + Partners," Ive added.

Apple Park will also include a visitor center with an Apple Store and cafe open to the public, a 100,000-square-foot fitness center for Apple employees, secure research and development facilities, and the Steve Jobs Theater. The parklands offer two miles of walking and running paths for employees, plus an orchard, meadow and pond within the ring's interior grounds.

Designed in collaboration with Foster + Partners, Apple Park replaces 5 million square feet of asphalt and concrete with grassy fields and over 9,000 native and drought-resistant trees, and is powered by 100 percent renewable energy. With 17 megawatts of rooftop solar, Apple Park will run one of the largest on-site solar energy installations in the world. It is also the site of the world's largest naturally ventilated building, projected to require no heating or air conditioning for nine months of the year.

Despite criticism, Facebook’s mimicking method has shaped its mega success 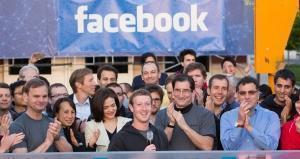 Copying ideas is an issue that has caused tech giants to clash in publicly fought patent battles. In 1996, Apple’s founder Steve Jobs famously quoted Picasso who said: “Good artists copy; great artists steal”. That idea seems to have rippled throughout the tech industry – and it particularly applies to one of Apple’s most prominent rivals, Facebook. When it comes to OTTs and the innovative communication tools being introduced by the likes of Snapchat, Facebook has gained a reputation for swooping in and mimicking an idea, only to make it bigger and better.

There are plenty of examples out there – the most recent being Facebook’s payment system announced for Messenger. Apple released its first mobile payment and digital wallet service for iOS in October 2014 that would let users make payments using their Apple device in retail stores by using a built-in NFC chip (Near Field Communication). Android soon coined the idea and released Android Pay in September 2015, developed by Google (ironically, Steve Jobs once told his biographer Walter Isaacson that he would “destroy Android, because it’s a stolen product”).

One year after the release of Android Pay, on September 12, 2016, Facebook announced a new online payment system allowing businesses to sell directly to consumers on its Messenger application, thus ending the need for a separate app to make payments. It’s the ultimate example of Facebook copying its rivals to produce something bigger and more exciting.

Although Facebook boasts the top app in the world, with close to 1.7 billion users worldwide, it has developed a reputation for ripping off ideas; particularly those of other OTT (Over-The-Top) platforms like Google and Snapchat. Even at the beginning of Facebook’s inception, Mark Zuckerberg, Facebook’s CEO and founder, was accused of stealing the idea for the social media network from fellow Harvard students the Winklevoss twins.

Mimicking is common in the tech industry, because arguably, copying ideas is the only way for innovation to thrive; and that’s especially the case for Facebook. For example, when Instagram (which is owned by Facebook) introduced its new ‘Stories’ video feature, it was immediately marked by media and analysts as being a direct copy of Snapchat’s own ‘Stories’ feature. From the name of the new format, to the fact that users can add playful special effects that disappear within 24 hours, it’s safe to say that Instagram’s feature is a Snapchat clone.

“Facebook is very worried about Snapchat,” says NYU marketing professor Scott Galloway, quoted in an article by Forbes. “Facebook is used to owning social media, and not being the hottest girl on campus has them a little freaked out.”

Snapchat introduced its ‘Stories’ feature in 2013, pre-dating Instagram’s feature by three years. It’s important to remember that Snapchat’s CEO Evan Spiegel turned down Facebook’s $3 billion acquisition offer in 2013. It shows a common trend (among social media apps in particular) where they have always - to a certain extent - copied from one another.

Facebook proudly holds the title of inventing the news feed, the same way Twitter is hailed for inventing the hashtag phenomenon. But because Facebook is such a massive enterprise, comprising Instagram’s 500 million users, as well as WhatsApp and Messenger which have around 1 billion users each, it doesn’t go unnoticed when Facebook copies a rival. Whether it’s Apple, Google or Snapchat, Facebook shamelessly goes where others have gone before, and often does it better.

Facebook’s imitation of Snapchat can be traced back to December 2012, when the social media giant launched an app called Poke for sending photos and video messages that disappeared within seconds, which is the basis of which Snapchat was launched in 2011. In the end, Poke didn’t really take off, and Facebook shut it down in 2014, leaving Snapchat to dominate the concept. It goes to show that copying ideas doesn’t always pay off.

Facebook’s latest target industry to dominate is online payments, circling in on Apple and Google’s hold on the world’s smartphones, with iOS and Android boasting a 90 percent market share. Facebook is attempting to turn its once humble messaging platform into an operating system of the future, by once again taking an idea developed by its competitors, and spinning it into something more impressive.

Earlier this month, Zuckerberg invited businesses to follow in the footsteps of Uber and 1-800 Flowers to set up official profiles on Facebook’s Messenger app, which would allow them to chat to multitudes of customers at once through chat bots. There are many who believe that chat bots could soon become just as (or more) important than apps are today. In order for Facebook to break Apple and Google’s hold over the smartphone market, the company will reportedly copy Tencent’s success in China.

The same way Facebook has got Uber and 1-800 Flowers on board, Tencent, recently declared to be China’s most valuable company, has thousands of businesses signed up with official accounts on Tencent’s WeChat messenger, which has transformed the chat app into a vast marketplace for ads, sticker bots, and transactions. It’s an interactive concept, acting as “a portal to the Web itself,” as Forbes reported.

Successful innovation can generate revenue for a company, and Facebook has mapped out a roadmap for itself to make as much revenue as it can through new features for its users, regardless of whether or not people call it out for copying. Edison Investment Research analyst Richard Windsor predicts that the social media giant’s revenue could double over the next five years if it transforms Messenger into a thriving interactive ecosystem that includes mobile payments. So, can you really blame them?

Facebook customers will be able to pay for items without having to leave the Messenger app, which gives it a distinct advantage over Apple Pay for instance, which is a separate app itself. Facebook is said to be working with Visa, MasterCard, and payments processing companies Braintree and Stripe to develop the concept. But Facebook still faces competition with the likes of Canada’s Kik, which has a two year head start and a strong appeal to the teenage market. Still, Facebook’s brand is powerful and reaches much further.

Facebook introduced its new ‘live’ feature this year, which is a way for its users to broadcast videos to a large audience. When a user goes ‘live’ Facebook sends a notification to their friends and followers to notify them of the live broadcast. It has been popular with media companies who are able to broadcast live to their followers, and also for celebrities, because those watching the live video can leave comments, which transforms the format into a Q&A type of setting.

Twitter has tried to establish itself as a live broadcasting platform. Its first broadcasted NFL match between the Buffalo Bills and New York Jets was watched by more than 2 million people on Thursday, September 15. The successful NFL broadcast was a pivotal moment for Twitter, which is widely known to be struggling as it tries to attract more users and ad dollars. The best thing about the broadcast was that viewers did not need a Twitter account to watch the game, making it easy for them to access it.

The live broadcast concept appeals strongly to younger viewers who are used to watching more video online without a television subscription. But Twitter’s successful broadcast doesn’t mean that Facebook should be worried. Even though Twitter’s broadcast was a successful leap forward, analysts say it’s too early to determine whether it will be enough to turn around the company that’s competing with a massive platform like Facebook which has 1.7 billion users, while Twitter has about 313 million.

Facebook’s ‘live’ feature has ultimately been a hit for Facebook, and it’s no wonder other similar platforms would want to mimic its success. The rewards of mimicking can be massive, with the potential to spark more engagement and user growth. Zuckerberg has said that video will continue to be a core pillar of Facebook moving forward.

“We see a world that is video first, with video at the heart of all of our apps and services,” he said during a conference call with investors in July. Regardless of the fact that Facebook has been criticized for shamelessly mimicking its rivals, one cannot deny that the social media giant has mastered the art of re-developing ideas into positive social communication movements that are changing the world.