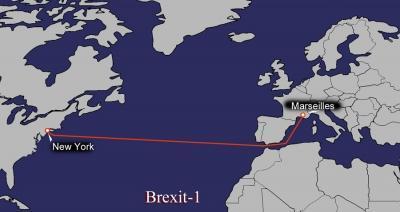 A new transatlantic cable which avoids the UK has been announced between Europe and the United States as the “chaos around Brexit” continues to grow. Named ‘Brexit-1’, the cable will link Marseille, France, to New York, crossing the Strait of Gibraltar. The project was announced by telecom expert and entrepreneur Sunil Tagare, who first developed the concept of a fiber-optic link around the globe (FLAG) back in 1989.

Now owned by the Global Cloud Xchange, today FLAG extends to 28,000 Km. Tagare announced the ‘Brexit-1’ project on LinkedIn and explained that Brexit-1 will “be a submarine cable connecting more than a dozen cables landing in Marseilles from the Middle East, India and Asia to New York bypassing the United Kingdom.”

Neal claims the cable will be safer and more reliable than other trans-European solutions as it is a direct cable without points-of-presence (POP). Tagare has also said the cable will be the lowest latency infrastructure deployed between Marseille and New York.

Talking about Brexit, Tagare said: “With the chaos around Brexit, it is virtually impossible to know how it will shake out over the next few years. The best bet right now is to avoid UK completely and go directly to New York.”

As for Brexit, experts highlighted that most major cables announced recently have also avoided the UK; however, not due to Brexit, but due to the lack of content providers’ data centers in the country.

Peter Jamieson, who serves as chairman of the European Subsea Cable Association and principal engineer for the Virgin Media core fiber optic network, commented on a personal level: “It is not just this cable, every future Trans-Atlantic cable recently installed or planned within the next five years (except Hibernia Express, which goes to the UK, but also has a branch to Eire) is avoiding the UK.”

“But it has nothing to do with Brexit, the new systems are being driven by the content guys and they do not have any data centers in the UK. Brexit will not impact any future builds to the UK. The UK is still well served by the infrastructure installed during the .com bubble, although it is getting a bit long in the tooth now.

“London will continue as global financial center after Brexit, and new infrastructure will be built when it is demanded. Indeed Brexit should be seen as an opportunity to de-shackle the UK from Euro legislation to encourage more content players, data center builders, etc. to base themselves in the UK and drive new cable builds to the UK.”