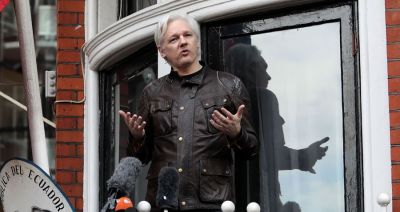 The arrest by London Metropolitan Police comes after the Ecuadorian President Lenin Moreno revoked Assange’s asylum status for ‘repeated violations’. THE ARREST WAS MADE AT THE Ecuadorian embassy in London where Assange was previously claiming asylum since 2012. He has now been taken into custody at a police station in Central London and will soon be presented for a hearing at Westminster Magistrates’ Court.

The Metropolitan police said, “The MPS [Metropolitan Police Service] had a duty to execute the warrant, on behalf of Westminster magistrate’s court, and was invited into the embassy by the ambassador, following the Ecuadorian government’s withdrawal of asylum.”

The WikiLeaks founder’s future remains uncertain as last year President Moreno said he would have to leave the embassy “eventually” and had revealed that he was already discussing the end of Assange’s asylum with British authorities.

While Assange was in the embassy, he was given a set of rules to follow which he broke back in October 2018. Some of the rules he was provided with include taking care of his cat and avoiding any political activity online via the embassy’s Wi-Fi. These rules were given to Assange after he had appointed Kristin Hrafnsson to take his place as the WikiLeaks editor. His internet access was cut off and was forbidden from having any visitors of his own back in March.

To diminish the risk of being extradited to Sweden over allegations of sexual assault, he was granted asylum in 2012. The WikiLeaks founder was worried that if he were to be extradited to Sweden, he would possibly face charges relating to WikiLeaks’s publication of several US diplomatic cables.

The President of Ecuador posted a video on Twitter in which he states that while Ecuador respects his rights of asylum, his “discourteous and aggressive behavior” along with his “hostile and threatening declarations” against Ecuador as well as his “transgression of international treaties” are the reasons to why his asylum is “unsustainable and no longer viable.”

President Moreno tweeted: “In a sovereign decision, Ecuador withdrew the asylum status to Julian Assange after his repeated violations to international conventions and daily-life protocols.”

British home secretary Sajid Javid stated: “Nearly seven years after entering the Ecuadorian embassy, I can confirm Julian Assange is now in police custody and rightly facing justice in the UK. I would like to thank Ecuador for its cooperation and the Metropolitan police for its professionalism. No one is above the law.”

Assange’s arrest comes a day after WikiLeaks accused the Euadorian embassy in London for carrying out an “extensive spying operation” against Assange.