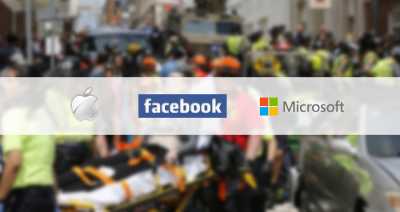 Some of the most prominent figures in the US technology sector have publicly expressed their dismay and anger following the racially charged violence in Charlottesville, Virginia last week. Microsoft, Apple and Facebook have all announced they will implement measures in a bid to fightback against the rise of white supremacists in the US.

Apple CEO, Tim Cook criticized President Trump’s response to the events last week - and in a letter to his employees said counter-protesters were standing up for human rights. Cook said, “I disagree with the president and others who believe that there is a moral equivalence between white supremacists and Nazis, and those who oppose them by standing up for human rights. Equating the two runs counter to our ideals as Americans.”

Cook revealed that Apple would contribute $1 million each to the Southern Poverty Law Center and the Anti-Defamation League, who are both human right groups. In addition to this, he said it was suspending its Apple Pay support on websites that sell white supremacy clothing and accessories. E-commerce platform PayPal has also implemented similar measures.

Microsoft CEO, Satya Nadella also voiced her concern at the violence in Virginia, and said there was absolutely unequivocally no place for such racist rhetoric in the US. In a letter to employees, Nadella said, “There is no place in our society for the bias, bigotry and senseless violence we witnessed this weekend in Virginia provoked by white nationalists.”

Cloud security and performance firm Cloud-flare also publicly announced that it has now terminated its account with neo-Nazi outlet ‘The Daily Stormer. The publication drew widespread criticism following the publication of a hate-filled feature on the victims of the Charlottesville violence.

President Trump drew criticism from technology leaders following his appointment to The White House in November. His controversial policies on immigration were widely condemned in Silicon Valley, and while President Trump has taken steps to build relationships with technology firms in Silicon Valley since taking office – there scathing criticism of his response to Charlottesville will not be well received by either Trump or his republican administration in Washington DC.