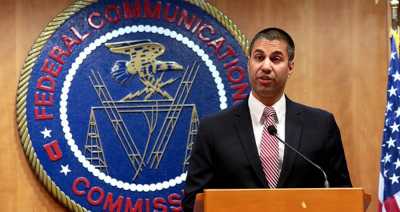 A group which represents a number of major US technology firms has appealed to the Federal Communications Commission (FCC) to retract its proposed plans to reverse a landmark decision taken in 2015 which prohibited internet service providers from blocking or slowing consumer access to online content.

The Internet Association which represents companies such as Facebook, Google, Twitter, Netflix and Microsoft has filed a complaint to the FCC in relation to the reversal on the decision made in 2015. It cited that the dismantling of the established net neutrality rules would create significant uncertainty in the market and disrupt a careful balance that has led to the current circle of innovation in the broadband ecosystem.

In May, Republican FCC Chairman Ajit Pai expressed his opposition to the order implemented by the Obama administration in 2015. The FCC voted 2-1 to advance the chairman’s plans to reverse the order which would reclassify internet service providers as if they were utilities. Pai has previously enquired if the FCC has authority or should keep its rules barring internet companies from blocking, throttling or giving ‘fast lanes’ to some websites, known as ‘paid prioritization’.

The FCC chairman has claimed that the order by the Obama administration is unnecessary and harms jobs and investment, and whilst he hasn’t committee to retaining any rules, he has stated that he would prefer an ‘open internet’. However, representatives on the Internet Association said that there is no reliable evidence whatsoever to reinforce Pai’s claim that ‘provider investment’ had fallen.

It has been disclosed that over 8.3m public comments have been filed on the proposal, and Pai will face questions at a US Senate hearing later this week. US telecommunications entities such as AT&T, Verizon Communications and Comcast Corp all vehemently opposed the order in 2015, saying that the order discouraged investment and innovation.

Telecommunication providers have insisted that they strongly support open internet rules and will not block or throttle legal website without legal requirements. However, they have conceded that ‘paid prioritization’ makes sense at times, citing self-driving cars and healthcare information. Internet firms say opening the door to prioritization could enable providers to "destroy the open nature of the internet that allows new or smaller streaming video providers to compete with larger or better-funded edge providers."

Internet providers have expressed their desire to see Congress resolve the long-running dispute over net neutrality and open internet protections. The Internet Association said it was open to alternative legal bases for the rules, either via legislative action codifying the existing net neutrality rules or via sound legal theories offered by the commission.