US President meets with tech leaders to encourage innovation 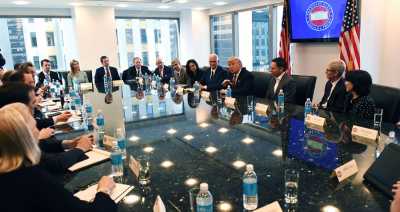 US President Donald Trump recently met with tech leaders at the American Leadership in Emerging Technology event which was attended by executives from the country’s leading operators such as AT&T CEO Randall Stephenson and Sprint CEO Marcelo Claure. Trump said he will give US companies the competitive advantage they need to lead the way in new technological development.

The White House event, which is part of FCC chairman Ajit Pai’s Tech Week in the US, centered on discussions about emerging technologies such as drones and 5G. In a speech addressing the executives at the event, Trump said, “We’re on the verge of new technological revolutions that could improve, virtually, every aspect of our lives.”

Trump promised he would support US companies by helping to “unleash the next generation of technological breakthroughs that will transform our lives and transform our country, and make us number one in this field.”

The President added: “This is a very, very competitive field. You see what’s going on in China and so many other countries and we want to remain number one. We want to go to number one in certain areas where we’re not number one and we’re going to give you the competitive advantage that you need.”

The event also included the US president meeting with other technology leaders such as representatives of Amazon, Google and Microsoft to discuss the government’s technology systems earlier in the week.

In a blog post published prior to Trump’s meeting, Ajit Pai expressed the importance of removing “barriers to innovation” – a topic frequently brought up by the chairman. He said: “In order for us to expand prosperity and extend economic opportunity to more Americans, we must remain on the cutting edge.”

Pai added: “This means that government at all levels must focus on removing barriers to innovation and ensuring that technological advances aren’t strangled by bureaucratic red tape.”