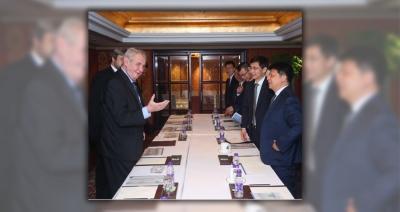 Joined by a delegation of government representatives, President Milos Zeman of the Czech Republic recently met with Huawei's Rotating and Acting CEO, Guo Ping, in Beijing. During the meeting, Guo Ping shared Huawei's latest developments in the information and communications technology (ICT) sector and expressed the company's intention to continue investing and growing in the Czech Republic.

President Zeman spoke highly of Huawei's contribution to the country's economic development. He also complimented the company on its choice of Jaromir Jagr, world-renowned Czech ice hockey player, as the brand ambassador of its devices, and congratulated Huawei on its growing share of the Czech market.

Guo noted that they require the full attention of each individual link along the value chain, as well as greater collaboration between them. President Zeman recognized Huawei's efforts in these domains, expressing his confidence in the security and reliability of Huawei's networks and products.

Guo confirmed that Huawei plans to spend approximately 360 million US dollars in the Czech Republic over the next five years, supporting 4,000 local jobs. Guo also expressed Huawei's hope to strengthen its partnership with the country on key initiatives like national broadband, smart city, and safe city.