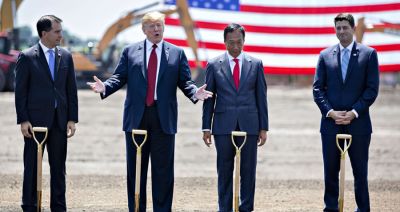 Taiwanese electronic colossus Foxconn has now admitted that it is currently reassessing its plans to invest in a new $10bn factory in Wisconsin.

When first announced it was hailed as a significant win for US President Donald Trump who had promised rust-belt states that he would breathe new life into the manufacturing sector and create millions of jobs.

However, that deal now may be dead in the water due to the ongoing dispute between Beijing and Washington that is becoming increasingly toxic.

Foxconn manufactures devices and components for a host of the world’s leading technology leaders including Apple, and had previously unveiled its plans to build the $10 billion plant to make LCD flat screen televisions which would also in turn create around 13,000 new jobs.

The investment was vetoed by $4bn in controversial tax concessions which were embraced by Trump who said the deal was another illustration of his campaign promise which was to put America ‘first’ again. Trump has also tried to strong arm other tech giants like Apple offering them tax breaks if they move manufacturing back to the United States.

Trump appeared with Foxconn CEO Terry Gou at a groundbreaking ceremony proclaiming and stated that, "This is just the beginning. This is one of the largest plants in the world."

However, the global economic climate roiled by Trump's trade war with China where Foxconn has most of its assembly lines -- has led officials at the Taiwanese company to look again at the plans.

"The global market environment that existed when the project was first announced has changed. As our plans are driven by those of our customers, this has necessitated the adjustment of plans for all projects, including Wisconsin," Foxconn said in a statement Thursday.

However, Foxconn has moved swiftly to deny it’s pulling out of the proposed investment and released an official statement saying it is remained committed to building its science park in Wisconsin and wants to help create 13,000 jobs".

Woo told Bloomberg, "We’re not scrapping our plans at all. However, given the global economic conditions and the trade tensions between China and the US, its’ impossible to say that we can always stay committed to our original plan without any change."