Could ‘Smart Guns’ be the answer to gun violence in the U.S.? 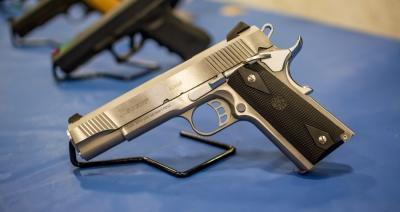 In the United States, almost 7,000 children committed suicide using a gun from 199 to 2014. Meanwhile, thousands of people are killed every year with “misappropriated” guns. In a bid to end this colossal loss of life from guns, the concept of ‘smart guns’ has emerged: guns equipped with fingerprint scanners, radio frequency chips or other technology that could block anyone but the owner from using it.

The New York Times recently reported that the U.S. Department of Justice issued official guidelines for the manufacture of ‘smart guns’ on November 16. The guidelines have been released aiming to “shape the future of gun safety technology,” which was an executive order executed in January by President Barack Obama. The President received swift backlash from the National Rifle Association gun lobby, who said the guidelines were a desperate effort by Obama to claim “a ‘win’ during his waning days in office.”

According to the NYT report, ‘smart gun’ technology is currently available. In fact, the new guidelines “reignite the promise of smart guns’ – an idea that was cut short 16 years ago when the N.R.A. boycotted Smith & Wesson after the gun manufacturer approached the White House with a proposal to explore intelligent gun technology. The idea was patented by Jonathan Mossberg, “scion of the nation’s oldest family-owned gunmaker, O.F. Mossberg & Sons,” says the report. The patent was for a shotgun in 2000 that was able to block firing by anyone not wearing the shooter’s radio-frequency identity ring.

The NYT report suggests that the gun industry doesn’t lack the knowledge for ‘smart gun’ technology, but is restrained by gun-lobbyists who are opposed to change and advancing the safety of weapons. But the guidelines could push for exciting new industry standards, such as reliable battery power in a smart gun for increased speed when drawing a weapon and for the distance allowed between the gun and its owner’s ID device.

“If a child can’t open a bottle of aspirin, we should make sure that they can’t pull a trigger on a gun,” said President Obama when he ordered Justice and Homeland Security officials to outline a strategy for “the real-world deployment of smart-gun technology.” This, according to the report, includes testing of new smart firearms at the Army’s Aberdeen Test Center in Maryland. Questions have been raised about whether or not President-elect Donald Trump will continue to push for safer gun regulations.