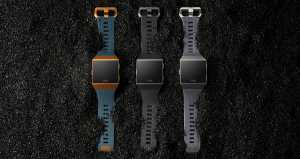 Fitbit Iconic also features contactless payments, on-board music, smart notifications, and a variety of popular apps and clock faces available in the Fitbit App Gallery. The device comes with all the core features that Fitbit is known for, such as 4+ day battery lie, automatic activity and sleep tracking, and cross-platform compatibility.

You can pre-order a Fitbit Iconic today for $299.95 from Fitbic.com and in retailers starting October 2017, with a new Fitbit Iconic Adidas special edition device coming in 2018. The relationship will leverage Adidas’ robust performance program expertise with Fitbit data and insights from millions of global users to help athletes of all levels perform better, play better and feel better.

The Fitbit app software development kit (SDK) will be open to developers in September 2017.

“Ten years ago, Fitbit pioneered the wearables category with the introduction of its first health and fitness tracker. Since then, we have become the leading global wearables brand, setting the pace of innovation in the category and establishing the largest social fitness network that helps millions of people around the world be healthier,” said James Park, co-founder and CEO of Fitbit.

“With Ionic, we will deliver what consumers have not yet seen in a smartwatch – a health and fitness first platform that combines the power of personalization and deeper insights with our most advanced technology to date, unlocking opportunities for unprecedented health tracking capabilities in the future,” Park added.

In March 2017, IDC reported that the worldwide wearables market reached a new all-time high as shipments reached 33.9 million units in the fourth quarter of 2016, growing 16.9 percent year on year. Shipments for the entire year grew 25 percent as new vendors entered the market and previous champions refreshed their product lineups.

Fitbit maintained its dominance in the wearables market, holding the top position for both the quarter and the year. However, the company also faced one of its largest declines ever as it remained heavily focused on the US, a market that is quickly approaching saturation for fitness trackers. Though the company has grown in other parts of the world, it also remained challenged as low-cost competitors eat away at Fitbit's market share.