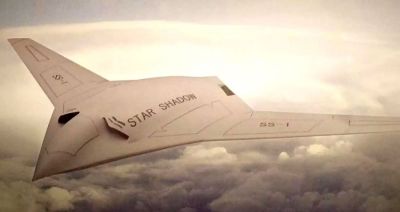 A Chinese drone maker has unveiled an unmanned warplane that can fly around for forty hours without needing to be refueled. ‘The Spy Hawk’ is invisible to radar and can scout ground targets from 9,800 ft according to its developers.

Footage released by Sea Hawke General Aviation Equipment Company Ltd shows the drone taking off from a runway in an unspecified location, and was widely shared across Chinese social media on New Year’s Day.

It is the first time the top-secret drone has been showcased to the public, as details surrounding the aircraft were previously shrouded in secrecy by the Beijing government.

A prototype was revealed briefly to spectators during the China International Aviation and Aerospace Exhibition in Zhuhai last November, but until now information regarding the aircraft remained widely unknown.

The Spy Hawk has a wingspan of 18m (59ft), can carry up to 370KG and is capable of taking a clear picture of a car's number plate while flying at the altitude of 3,000 metres (9,800 feet). The warplane can penetrate key enemy targets in a “highly threatening battling environment” says its designers, and is constructed of “world first” technologies.

It was announced last February by Sea Hawke that the drone had completed its first flight a month before.

It is the fourth UAV (unmanned aerial vehicle) from the Chinese company after predecessor stealth drones ‘Star Shadow’, ‘Sharp Sword’ and ‘CH-805’.