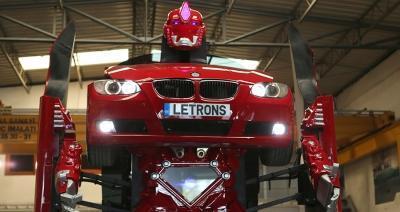 A futuristic car which transforms into a robot is set to be unveiled at an exhibition that takes place at ADNEC in Abu Dhabi on November 23rd. The creation is the brainchild of Turkish company Letvision which have created this ‘auto-bot’ which has been named the Antimon. It is a red BMW E92 that turns into a robot in approximately 30 seconds.

It is the star attraction at ‘The Big Boys Toys’ exhibition that will allow fans of the Hollywood blockbuster Transformers see a car morph into a robot in front of their own eyes. However, the car does not come cheap – if you wish to purchase this futuristic mean machine it will cost you an eye-watering $600,000. Bids will begin at $600,000 which was the original cost of the car, but it is expected to go for more than that at auction.

The car was designed and developed by a skilled team of engineers – with twelve engineers and four technicians working on the innovative project over a period of eight months, and it will be won’t be the last as the company plan on developing 300 such cars per year - that will have more features and technology.

Those considering purchasing the vehicle with aspirations of test driving it on Sheikh Zayed Road will be ultimately left disappointed as the Antimon is remote-controlled – with no seats inside with a maximum speed of 20kph. But let’s not forget that Optimus Prime, sorry the Antimon turns from a car into a robot!

A spokesman for Letvision confirmed that there will be eleven cars joining the fleet in the forthcoming months. “Since it’s the first of its kind, we will auction Antimon to any buyer who wants to be the owner of the world’s first transformer. “Bids will start at $600,000, which is the original cost of the car, but there will be eleven more cars being made in the next number of months.”