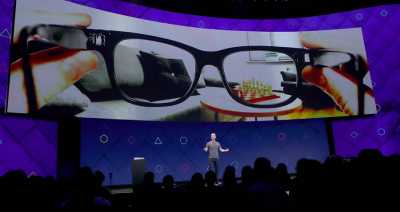 Social networking colossus Facebook has announced that it is attempting to make a ‘technical ‘breakthrough in relation to developing and manufacturing futuristic ‘smart glasses’ specifically designed to allow you see to see virtual objects in the real world.

It has emerged that Facebook published a patent application for a ‘waveguide display with two-dimensional scanner’ which was compiled by three members of its advanced research division of Facebook’s VR subsidiary Oculus.

It has been reported that the display may augment views of a physical, real-world environment with computer generated elements. In addition to this, the patent filing also suggested that the display being developed may be included in an eye-wear comprising a frame and a display assembly yhat presents media to a user’s eyes.

Facebook CEO Mark Zuckerberg has previously expressed his belief that virtual and augmented reality - represents the next major computing platform which is capable of replacing smartphones and traditional PCs. Facebook acquired Oculus in 2014 for $2 billion and has announced its intentions to continue to invest billions on developing more revolutionary technology.

The ‘smart glasses’ currently being developed by Oculus will use a waveguide display in order to project light onto the wearer’s eyes instead of a more traditional display. However, it has also been claimed that the ‘smart glasses’ would be able to display images, video and be compatible with connected speakers or headphones to play audio when worn.

Facebook has thus far declined to comment on the patent application, but analysts have suggested that the social networking firm have adopted a similar approach to Microsoft, when they launched its HoloLens AR headset. Oculus’s ‘smart glasses’ have also drawn comparisons with glasses being developed by Google start-up Magic Leap.

Interestingly, one of the lead authors of Facebook’s patent application is optical scientist Pasi Saarikko who joined Facebook two years ago, after he spearheaded the optical design of HoloLens at Microsoft. However, despite the announcement being made in relation to work commencing on Facebook’s ‘smart glasses’, analysts have claimed don’t expect to see the device anytime soon.

Chief scientist of Oculus, Michael Abrash said AR glasses won’t start replacing smartphones until 2022. He said, “20 or 30 years from now, I predict that instead of carrying stylish smartphones everywhere, we’ll wear stylish glasses. Those glasses will offer VR, AR and everything in between, and we’ll use them all day.”