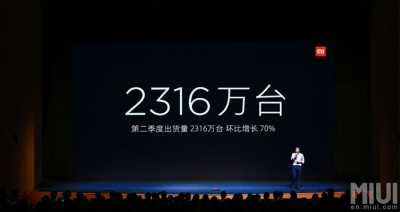 Xiaomi founder and CEO, Lei Jun, revealed that the company shipped a record 23.16 million smartphones in Q2 2-17, reflecting an increase of 70 percent from the previous quarter, marking a record high for Xiaomi’s quarterly smartphone shipments.

The achievement has been attributed to the company's relentless pursuit of technological innovation, striving for operational excellence with users at its core. Over the last few years, Xiaomi has consistently increased its investment in R&D. Today, these investments are bearing fruit.

In February, Xiaomi launched Surge S1, its proprietary chipset designed and developed in-house, marking a breakthrough in chipset technology capabilities. These are practical demonstrations of the company’s technological capabilities. Last year, Xiaomi applied for 7,071 patents globally and was granted 2,895, of which half are international patents.

At the start of this year, Lei personally spearheaded a committee to assess the quality of Xiaomi products. After internal discussions, Xiaomi laid out the blueprint of its action plan and established a division solely focused on product quality, accompanied by its goal to win through the ‘iron-fist’ of quality.

Xiaomi’s recovery follows a year of setbacks that collectively signify the most challenging period in its history. Smartphone sales softened as it struggled with two instances of supply issues, each one hampering the supply chain for several months. However, the company was able to use this time as an opportunity to recalibrate many aspects of the business. The Q2 shipment results reflect the improvements made in relation to the supply of Xiaomi products.

The company has also seen huge growth in its global business as a result of three years of investments. For 2017, Xiaomi has racked up successive wins as its global business crosses the inflection point of explosive growth. The company's performance in India, in particular, has been especially encouraging, with revenue in the first half of the year up 328 percent Year-on-Year (YoY) and is now the 2nd leading brand in the overall Indian smartphone market.

Redmi Note 4 has become the highest-shipped smartphone in the country and Xiaomi is now widely recognized as a leading brand. Elsewhere, the company is seeing great results in Indonesia, Russia, Ukraine, and a number of other countries.

Lei also shared that competing for global market share represents the third wave of opportunity that will shape the Chinese smartphone industry. This follows the first wave of urban Chinese smartphone adoption and the second wave of new smartphone users from China’s third and fourth-tier cities.  Seizing this opportunity marks the beginning of Xiaomi’s journey as a technology company on the global stage.

“Why were we able to resume growth? The secret lies in Xiaomi’s business model and our values. Xiaomi has proven the resilience of our business model over the last seven years, both through our incredible growth in the early days, and our reversion to growth after a period of recalibration,” he said. “We firmly believe that as long as we continue to befriend our users, produce exciting products with accessible pricing, and stay true to our core values of sincerity and passion, we will inevitably win users and the market.”

Lei noted that today’s smartphone market is brutally competitive and Xiaomi has only taken the first steps of its journey. In order to continue growing, he said the company should continue to remain true to its core values, and innovate relentlessly.

“We have to give our engineers the freedom to think outside of the box, and explore fearlessly without boundaries,” he said. “We set no limit when it comes to innovation and investment. In the next 12 months, we will need to hire thousands of R&D talent for our smartphone business and further bolster our innovation capabilities.”