Trump warns Apple could be hit with 10% tariff charge 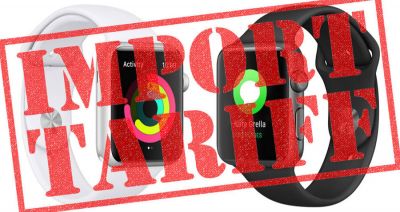 Comments made by President Donald Trump suggest he could implement a 10% tariff on Apple products imported from China. In an interview with The World Street Journal, Trump was questioned about the possible iPhone and laptop tariffs.

“Maybe. Maybe. Depends on what the rate is,” He said, “I mean, I can make it ten percent, and people could stand that very easily.”

A 25% tariff increase on $200 billion of Chinese goods are expected by Trump, and he will also add $267 billion worth of tariffs onto goods that are not already subjected to existing tariffs if the two countries don’t make a deal.

When asked about whether he would delay an increase in tariffs from 10% to 25% on January 1st, Trump said it would be “highly unlikely”, which looks set to cause further tensions between him and Chinese President Xi Jinping.

The trade war is likely to hurt American brands such as Apple, and affect their sales.

Previously exempt from the tariffs, Apple products such as the IPhone, AirPods and the Apple Watch would be affected. His comments saw the Apple stock down nearly 2% in after-hours trading.