Samsung takes the fight to Apple by opening new US stores 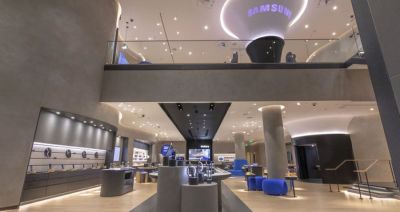 South Korean conglomerate Samsung has unveiled its ambitious strategy to enhance its market share in the US by launching three new retails stores nationwide.

Samsung officially announced that it will open the new retail facilities as it gears up to launch an updated version of its flagship Galaxy handsets in the United States.

Some consumer experts are also claiming that the marketing strategy adopted by Samsung indicates clearly that the Seoul-based behemoth is directly challenging Apple in its domestic market.

Samsung said in a detailed statement that it made the move based on feedback from its customers.

The statement said, "They told us that they love having the ability to walk into a store and experience how the latest technology from Samsung works together to create a unique, immersive experience. Galaxy fans, in particular, mentioned that they were looking for a space to call their own, a place where they can get a feel for Samsung products first-hand."

It was further disclosed that the new stores will be located at the Americana at Brand mall in Los Angeles; Roosevelt Field in Garden City, New York; and The Galleria in Houston, Texas.

In addition to this, Samsung is holding a product launch in San Francisco amidst speculation it may launch a folding smartphone, which would make it the first of the major handset makers in the segment.

President of Samsung Electronics America, YH Eom, expressed his delight at the announcements and said the decision would solidify Samsung’s position as the world’s most popular smartphone manufacturer.

He said, “Our new Samsung Experience Stores are spaces to experience and see Samsung technology brought to life, to empower people to do what they never thought was possible before. We want to build a 'playground' for Samsung fans -- a place to learn about and try out all of the amazing new products we have to offer."

Samsung remained the number one global handset maker with a 20.8 percent share in 2018 despite an eight percent sales slump for the year, according to research firm IDC -- which also said last year showed the worst overall decline in sales for the smartphone sector.