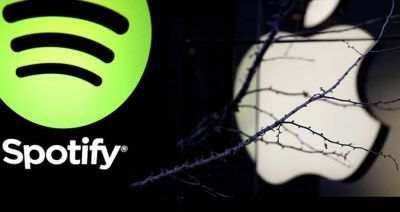 Spotify has launched an entire website titled Time to Play Fair where it has laid out its arguments against Apple and its use of the App store. On a page titled “Five Fast Facts” that show how Apple doesn’t play fair, the claimed the following:

Shortly after, Apple responded to the claims publicly in a post in uts Newsroom website stating that Spotify is engaging in “misleading rhetoric” and concealing certain facts such as the fact that Apple takes no cut at all from the revenue they generate from advertising.

In response to this, Spotify said in a statement to Variety that “every monopolist will argue they have done nothing wrong” and that the tech giant’s response was “entirely in line” with their expectations.

Spotify’s full response to Apple was as follows:

“Every monopolist will suggest they have done nothing wrong and will argue that they have the best interests of competitors and consumers at heart. In that way, Apple’s response to our complaint before the European Commission is not new and is entirely in line with our expectations.
We filed our complaint because Apple’s actions hurt competition and consumers, and are in clear violation of the law. This is evident in Apple’s belief that Spotify’s users on iOS are Apple customers and not Spotify customers, which goes to the very heart of the use with Apple. We respect the process the European Commission must now take to conduct this review.”

Apple has failed to address a claim made by Spotify on the fcat that it operates a platform where it distributes digital goods that compete with their own; in this case, it would be Apple Music. “Either they run the platform or they play in the store. They don’t get to do both at the same time,” said Elizabeth Warren to Verge, “It’s got to be one or the other.”