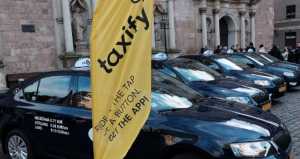 An Estonian taxi startup company has announced its bold ambition to take on global ride-hailing colossus Uber in both London and Paris. Taxify announced that it will initially launch its services in London after it signed up 3,000 private hire taxi drivers following an intensive recruitment process which was needed to meet UK licensing and regulatory requirements.

Its expansion into the UK serves to indicate that Taxify is confident it can replicate the success it has enjoyed in other markets. The Estonian company have already benefited from the uncertainty and scandal that has plagued Uber in the last six months - by stealing a march on them in Eastern Europe and Africa.

London is a saturated market when it comes to taxi services. The English capital is home to the world-famous black cabs and private hire firm Addison Lee, who compete with other ride-hailing apps such as GETT and HAILO, which is now incorporated in Daimler’s MyTaxi.

Uber has a large slice of the market share in London, it boasts over 40,000 drivers and has 3 million London users, with the Silicon Valley based company claiming that users make over 1 million trips a week.

Taxify operates in 25 countries which is in stark contrast to that of Uber, who rollout its services in 600 cities across the world. However, its USP is that it allows passengers to pay marked-down fares which in turn lets drivers retain a bigger share of the profits, whilst it’s run on a much lower cost business model that Uber.

Taxify is directly targeting Uber’s customer base by offering a 15% commission on rides booked through the online platform. Uber charges between 20-25% in London. In addition to this, Taxify will accept cash as well as electronic payments unlike Uber.

The CEO and founder of the Estonian startup Markus Villig insisted its policy is that it will always be cheaper than Uber. Uber has just appointed a new CEO in order to bring much needed stability to the organization. It has endured a hugely difficult year, it has been embroiled in sexual harassment cases, legal disputes over the legality of the services it provides, and co-founder Travis Kalanick was forced to resign as CEO.

Uber’s new boss is former Expedia CEO Dara Khosrowshahi and he has vowed to take the company public in the next few years, and said the company had to change in order for it to continue to expand. Taxify has enjoyed incredible success since its inception and will be confident it can penetrate the UK market.

It’s based in the Baltics and it first staked out in major cities all across Eastern and Central Europe, before expanding operations in Africa. Its CEO has declared that he believes they will overtake Uber by the end of this year. The taxi company has been boosted by investment from China’s rife-hailing firm Chuxing DiDi and aim to expand into Paris before the end of 2017.